Not a lot of bike riding this week, mostly because my bottom, along with the rest of me, is now officially stressed, as evidenced by a rather painful, embarrassing and hard to spell ailment of the bottom that manifested after day 1 of last week’s Tour to Mavuradonha. Alas.
And even more stressful than the ailment itself is the thought of Frank having to peer up my bottom before attending to the said ailment. Frank, my doctor, is a cool guy who wears cool shirts and plays the guitar and peering at my bottom should be excluded from his version of the Hippocratic Oath.
But even more stressful than subjecting Frank to an up close view of where the sun don’t shine is the thought of pedaling all the way to Mt Kilimanjaro with an ailing bottom. Alas. Woe is me. And outside of fuel queues, worthless money and all the normal Zim dross, the root causes of my bottom problem; Molly’s biological clock and Steve Hanke’s misery index. 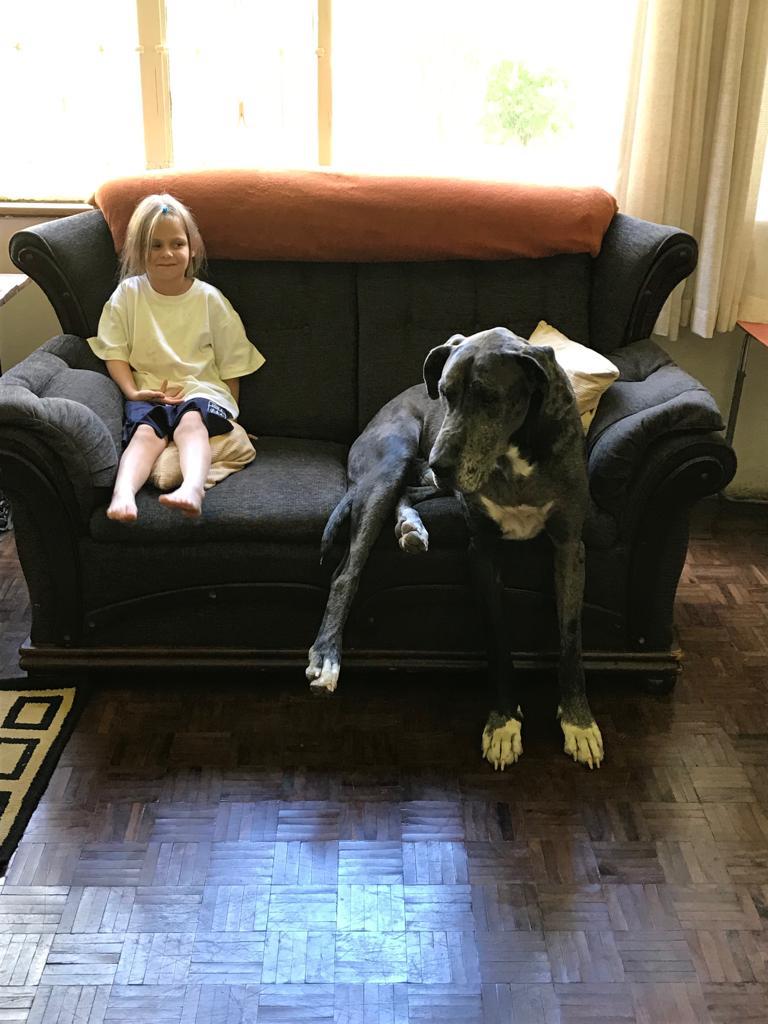 Molly is our three year old dog whose biological clock is ticking loudly. Jenny is desperate for Molly to have pups before we get her fixed. So how does puppy love get to be so stressful I hear you ask. The thing is Molly is Great Dane cross Horse. And where do you find a boy one of those??The pressure first started a year back when we borrowed a young stud called Hamlet for Molly’s second season but alas, Hamlet knew not what to do.
Pressure mounted as Molly’s third season loomed large, as did Wallace our Wheaton Scotty pup, when ever we weren’t watching. But thankfully he wasn’t up to the task. Great Scotts as a breed wouldn’t have worked out too good.
Under pressure, I scrolled through my network and emerged with Alfie, a Great Dane cross an even bigger Horse. We collected him last week. I have a deep seated fear of dog fights and panicked when I saw the size of Alfie. We got him in the car only just. Alfie is huge, 3 or 4 inches taller than Molly with teeth to match. What if Molly and Alfie got stuck into each other at first sight? As it turned out, I had nothing to worry about because Alfie is a gentle soul and it was love at first sight. Although the remnants of our flock of chickens would be hard pressed to describe Alfie as gentle. As soon as he got out the car Alfie thought he was in dog heaven, sex on tap and fast food chicken.
Alfie’s sense of direction was such though that Molly’s head stands a greater chance of falling pregnant than the rest of her.
Oh what fun we had. The Hound of the Baskerville has nothing on Alfie. Molly’s boudoir is outside our bedroom window and we were able to hear Alfie serenade Molly, mostly by howling romantically in her ear, every ten minutes throughout the night. Strewth
And then the next morning when I was at my lowest ebb, Steve Hanke hit me and my bottom with the news that we now live in the World’s second most miserable country.
Hanke, renowned John Hopkins University economist and Eddie Cross alter ego, has just released his Top 10 Misery Index. Based on inflation and unemployment stats, Hanke has Zimbabwe coming second only to Venezuela. (That Venezuela achieved top spot despite having the world’s largest oil reserves has to put their man Maduro in line for the coveted ‘Stupidest Leader’ award.)
I was surprised to see South Africa sneaking in at number 7, especially given their abundance of God given resources.
Come blame game time, Zim and Venezuela are lucky though because we can point fingers at US sanctions where as the South Africans will have to carry on blaming Apartheid, before eventually moving on to Zuma and the Guptas. 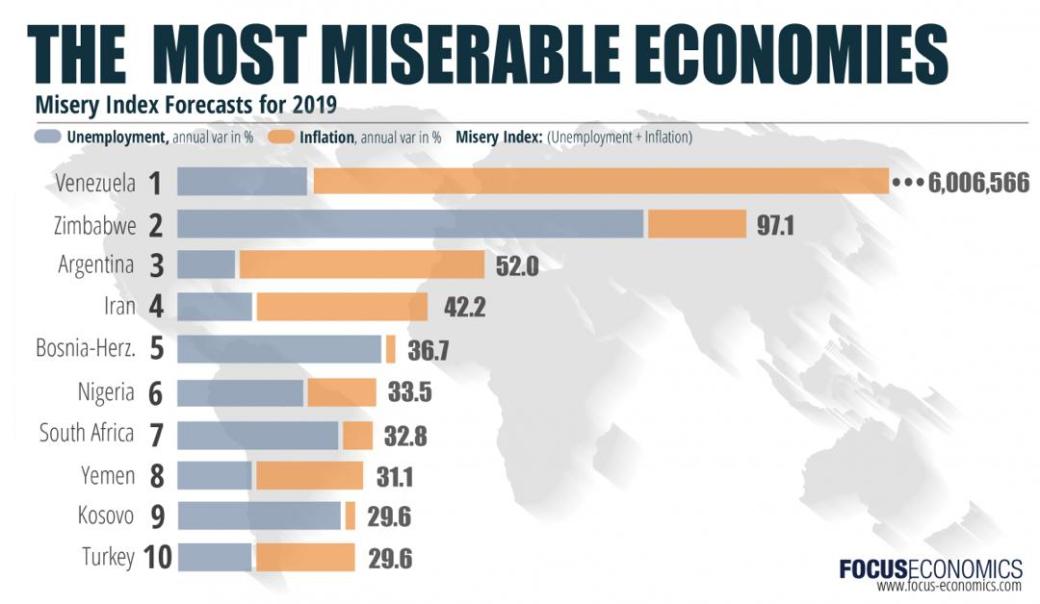 I can tell you though there remains a hell of gap between 7th and 2nd on Hanke’s Misery Index. I left Jenny to chaperone Alfie and Molly and fled to SA on a quick business trip. The difference between 2nd and 7th is huge. With petrol and diesel on tap and highways without potholes, SA looked more like milk and honey than a Top 10 basket case. Just 2 days there watching farmers farm, planting tree crops they’ll only harvest in years to come was such good muti for me. But in between being jealous, I worried for South African friends. Elections loom large in May and in the battle of the election poster on the 2 hour drive between the border and Tzaneen, Julius Malema was a hands down winner. If ever Julius got voted in, he’d beat Hugo Chavez in a stupid contest. God help Africa.

But en route to the border, I was pleased to see Zimbabwe is finally playing some catch up by upgrading the Beitbridge – Harare highway. But I wasn’t pleased for long. I hit the first over zealous speed hump on the detour outside Chivu real hard. I saw the second speed hump coming, up until I jammed on brakes. Whence upon my tool box careered across the boot, striking the knob of my fire extinguisher in the process and I spent the next 20 km driving along in a thick, acrid and very non-flammable fog. I couldn’t pick up hitch hikers for the rest of the trip because I looked like the guy in the dandruff advert, just without the hair.

We’ve got less than 8 weeks to go until we start riding our bikes to Mt Kilimanjaro to raise money and awareness for Zimbabwe’s pensioners. To help us help them, go to https://www.justgiving.com/fundraising/oldlegstour and follow the prompts. In Zimbabwe, transfer to Bulawayo Help Network via their CABS Platinum Account number 1124733450 or their Ecocash merchant number 139149. Monies donated help pensioners country wide.

Lakini ni heshima yangu Alfie na mapenzi wewe heshima Molly in ya asubuhi? –
But are your intentions honorable Alfie and will you respect Molly in the morning?

In closing, at the very opposite end of my stress spectrum is 5 year old granddaughter Cailyn who quizzed me on Wednesday. “Hey Eric, are we doing the Blue Cross this year?”
“For sure we’re doing the Blue Cross, Cailyn.”
“I don’t know if we should” she said looking worried.
“Why?”
“Because they told us at school today that Jesus died on the Blue Cross.”
(For those not in the know, the Blue Cross is a SPCA charity bike ride from the lowest point of Zim to the highest that me, Jenny, Jos, Cailyn and others ride every August.)

Until next week, avoid the stress and the speed humps and pedal if you can