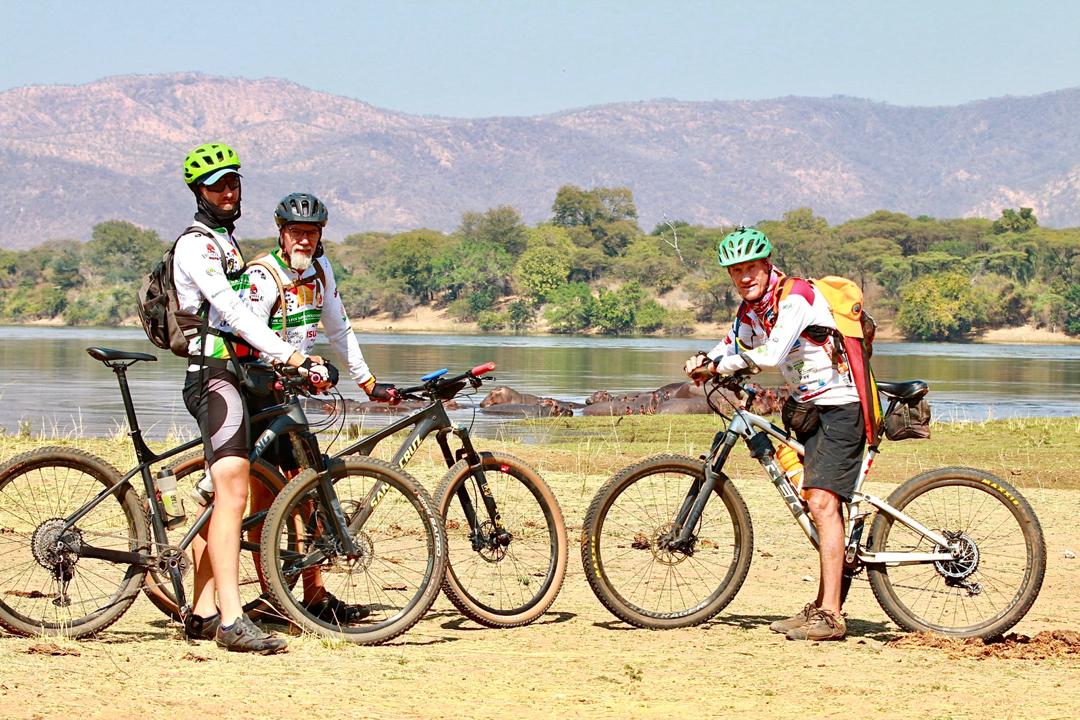 Pel’s Fishing Owl is not extinct. He is alive and well in the Kariba Gorge. I visited him on my bike on Day 28 of the Lockdown Tour. He looked like a big tabby cat sitting in tree. Impossibly, this Tour gets better and better.

But first let me tell you about our Day 27 adventures. We rode from Rukomechi to Chirundu. We rode 3 up because Mike has a wounded bottom.

But before we could start our ride, we had to get the Isuzus and the trailer across the sands of the Rukomechi River. Having heard of our prowess in sand, Rukomechi sent a vehicle to help us for just in case. After a month on Tour, we continue adept at getting the truck and trailer stuck in sand and didn’t disappoint.The Rukomechi was too wide and the sand too soft and the trailer went down in the first 10 meters. After an hour of trying and failing to dig out, we called it quits and decided to send Mike and Stu the long way round via Mana, while the riders and Isuzu One pressed on. After we left them, Stu, Mike and the guys from Rukomechi spent another 2 hours digging out.

The ride to Chirundu was very chilled with splendid river views and plentiful game, and soft sand and tsetse flies.
We disturbed vultures on their lunch which Gary identified as something dead. We were able to tick Hooded Vultures off our list.

We were urged on and cheered by well wishers on their way to Mongwe for the long weekend. Bummer. Most of them happened to bump into me whilst walking my bike through thick sand, swearing, leaving them wondering if I will get to Bulawayo by September. The Old Legs Tour doesn’t rate very high as a spectator sport.

We passed a long line of 300 trucks waiting to clear customs into Zambia as we rode into Chirundu. On first impressions, Chirundu is a dirty, dusty little border town, like Beitbridge but perhaps with not as much charm. But then you see the mighty Zambezi river. Wow.

Day 28 had us riding from Chirundu through to the Kariba Gorge. Bert Keightley and the men from Rhino Force provided us an escort through the old hunting concessions, A Camp, B Camp and C Camp a.k.a. RIFA. It has been transformed into a wildlife sanctuary measuring 40 km by 40 km managed by Rhino Force.

Bert passed lions on his drive into fetch us so I tucked in between Carl and Mark, because they have more meat on them than me. I am fast learning how to spell emaciated. Ditto Carl, even though he went to Vainona. Carl has discovered bones he never knew he had.

Rhino Force recently relocated 100 elephants from Gonarezhou, where elephants are cheeky and shout a lot. As we found out this morning when we snuck up on an elephant bull 30 minutes into our ride. Embarrassingly, I was able to accelerate away from Carl and Mark like they were standing still. Fear of trumpeting elephants is a better propellant than EPO, steroids and or lentils and lettuce.

Because bikes are quiet and quick, apart from mine, we are able to ride up to animals before they know we are there. We rode up to kudus and klipspringers today, and herds and herds of impala, beautiful, graceful, pronking and leaping across the road in front of us. We enjoyed a five minute breather on the Chironga River alongside a pod of 26 hippo.

I was able to fall off my bicycle, right in front of Bert Keightley. It was a total wipe out on the most innocuous of corners. And even worse, Paparazzi Gary was able to capture the moment on camera. And then to show it wasn’t a fluke, I almost fell off again ten minutes later. I could hear Bert Keightley shaking his head in the Land Cruiser behind, wondering how the hell I had made it from Bulawayo in one piece.

Bert delivered us to Nyamoumba Lodge at the mouth of the Kariba Gorge where we transferred our bikes to motorboats. Once we were on the water, it took our boat driver just 5 minutes to find me my Pel’s Fishing Owl. The Gorge is 18 kilometers long. It took us another hour to navigate it’s length. Silent, eerie and unspoiled, the Gorge is a beautiful place. It is also exciting. Hemmed in by the narrow Gorge, the Zambezi River has huge power. It was like bobbing on a boat in a cauldron.

The slog out of the gorge on foot in 34 degree heat was a harsh reminder that bicycles were invented by a pedestrian. I pushed my bike to keep Gary and 6 kilos of cameras company, plus most of the hills were to steep for me to pedal. Halfway up the first stupidly steep incline, I invented the concept of the disposable bike.

In other news, my kit bag continues surly and is now only offering up odd socks. Today I wore 1 green sock and 1 purple sock. I have no idea what lies beyond the top layer of dirty clothes. Kariba was a fuel and food resupply point. Thank to Bonks Barker and family for helping make it happen. And again thank you to Seapride Zimbabwe and thank you to Adam and Linda Selby. And thank you to Nick and Laura Brice for hosting us at Lomugundi Lakeside. Today we ride the Mutasadona shoreline from Spurwing to Tashinga and then across to Bumi and into the hinterland called Gokwe. Like I said, impossibly our Tour gets better and better.

In closing I’d like to thank our sponsors Biddulphs and UFO Supplies. Without your help, the Old Legs Tour would not happen. We are riding to raise money and awareness for Zimbabwe’s pensioners.

Until my next blog, stay safe, enjoy and pedal if you can.